He who must not be named: Kevin Adell bars any mention of Kwame Kilpatrick on 910AM 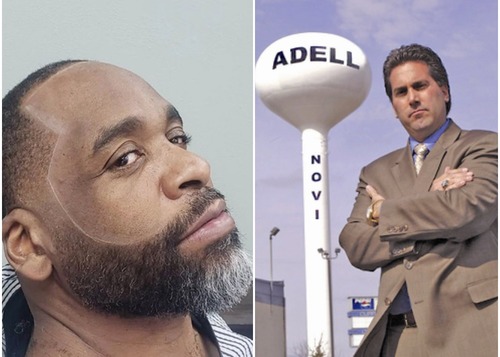 Kwame Kilpatrick is persona non grata at Kevin Adell's 910AM, as the bombastic station owner captures yet another headline by going after a would-be host.

According to at least one personality at the Detroit talk radio station, show hosts and guests are barred from saying Kilpatrick's name because Kilpatrick did not respond to  Adell's offer for a TV and radio show.

The Detroit News broke the story Tuesday afternoon, saying Adell wanted to give Kilpatrick 30 minutes on his The Word network and two hours during drive-time on 910.

Kilpatrick never responded, Adell says, rebuffing an offer that could help the politician satisfy probation conditions that include securing a job, and paying more than $1.7 million in restitution to the Internal Revenue Service and the Detroit Water and Sewerage Department.

"He blew it," Adell told The Detroit News on Tuesday. "I don’t want him on. We don't want drama here."

He heard through intermediaries that Kilpatrick was interested in hosting a radio show on 910 AM as part of a broader plan that includes starting a ministry. Adell drafted a proposal for Kilpatrick to host a two-hour radio show, an unpaid gig that would provide a platform and potential income through paid advertising.

“Selling ads is like climbing Mt. Everest with flip-flops,” Adell said. “Everyone here at 910 doesn’t get paid. But it gives you an opportunity for a platform you wouldn’t have otherwise.”

Kilpatrick did not respond to the paper's request for comment and has not granted interviews since his Jan. 20 release.

Adell's edict has already led two hosts to step down. Nicole Small, vice chair of the Detroit Charter Revision Commission, who had a daily show at the station, quit after being contacted by Adell Friday about potentially ending her show as she mulls a run for city council. Though she has yet to make a decision, she said "the censorship was too strong" to stay.

"It wasn't going to allow me to share information and there's a certain expectation when people listen to me," she said.

Elena Herrada, a former Detroit school board member who had a Sunday morning time slot, tendered her resignation Tuesday night, saying "I can’t in good conscience watch people get treated this way."

"This is so unacceptable, and to be there means that you accept it," she said.

Adell issued the order muzzling show hosts on Jan. 25 and extended it to guests Jan. 26 after Small says she had Byron Pitts on to discuss disparities in sentencing for Black and white defendants. Pitts represented Kilpatrick’s former top aide Derrick Miller.

Small said she was surprised by the haste with which Adell made the decision.

"I got the email and I said 'he's nuts,'" she said. "You're mad this man has been out for a week and he didn't respond to you? He's been in jail for seven years."

Gallery: Detroit residences in 'Caterpillar' tube are pitched as 'a new age monument'