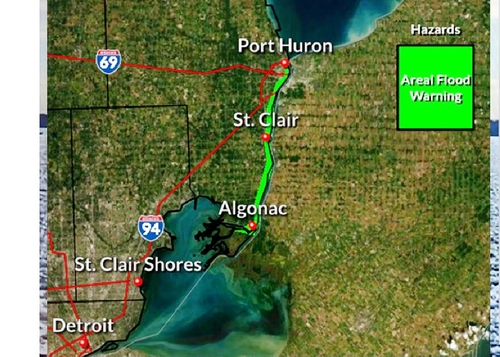 The St. Clair River, blocked by ice jams, continues to overflow its banks, with plunging temperatures adding to the misery for nearby residents from Port Huron to Algonac.

WXYZ reports that two more Coast Guard cutters are en route to the area in hopes of breaking up enough ice to allow the river, already at very high levels, to flow more freely.

Operation Coal Shovel, as it’s called by the U.S. Coast Guard, is now underway in the St Clair River. A number of U.S. and Canadian ice breakers are traveling up and down the river breaking up ice jams, but not before they caused massive flooding.

Some neighborhoods from Algonac to Port Huron are covered in sheets of ice, some homes filled with freezing cold water.

... The ice cutters have been on the river since Thursday, and now 2 more are being sent in relief. The Biscayne Bay, homeported in St. Ignace and the Morro Bay which is homeported in Cleveland were en route along the Great Lakes Saturday night.

The cutter Bristol Bay and a Canadian vessel have been working the river since last week.