In 1992, then-presidential candidate Bill Clinton told a heckler "I feel your pain," and the phrase caught on immediately, mainly because it can be deployed in so many ways -- sincerely, cynically, comedically. 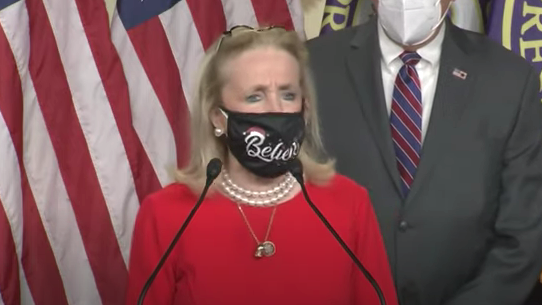 But Rep. Debbie Dingell wants you to know: She feels your pain. And your fear, about the Covid-19 vaccination.

In a paywalled story, The Detroit News explains that Dingell once had a bad reaction to a vaccine, and Guillain-Barre Syndrome left her partially, and temporarily, paralyzed. She had to screw up her courage to get the Covid-19 shot, but get it she did, and now she wants others to do the same.

"I was more scared than many," she posted Wednesday on Facebook, "but I could not have a normal life without it."

Dingell and other Michigan lawmakers are using social media, public statements and personal appearances to advocate for more vaccinations. With Covid cases surging in the state, pushing us to tops-in-the-nation status for new infections, the mission is critical:

Public health experts worry that vaccine hesitation among some groups — including Blacks, Republicans and rural Americans — could dampen efforts to stem the spread of the virus.

Officials have said that 70% to 85% of Americans would need to get the vaccine to reach what's called herd immunity. Michigan had vaccinated 22.8% of its 8.1 million adult population that's 16 years and older through Monday, according to state data.

So-called "vaccine hesitancy" is still keeping many from rolling up their sleeves.

"I hear the fear, and it’s real," said (Rep. Rashida) Tlaib, noting the grave mistrust of government health initiatives among Black and indigenous communities. "When I went public about getting the vaccination, that helped people. People in the comments said, 'Tell us how it’s going.'"

Rep. Peter Meijer, R-Grand Rapids, took to his Twitter to spread the news:

Today I received the second dose of the Pfizer COVID-19 vaccine. I encourage all those who are eligible to sign up for an appointment or waitlist in your area: https://t.co/YeQ7h9Kaya

This is how we beat COVID and get our country and economy back up and running! pic.twitter.com/d2b5l1XXJF

Meanwhile, cases continue to reach levels not seen since the first and second waves. Vaccination is now available to all Michigan adults, and public health officials encourage all who can to get their shot.