The columnist, a Los Angeles freelancer, is a former Detroit News business reporter who blogs at Starkman Approved 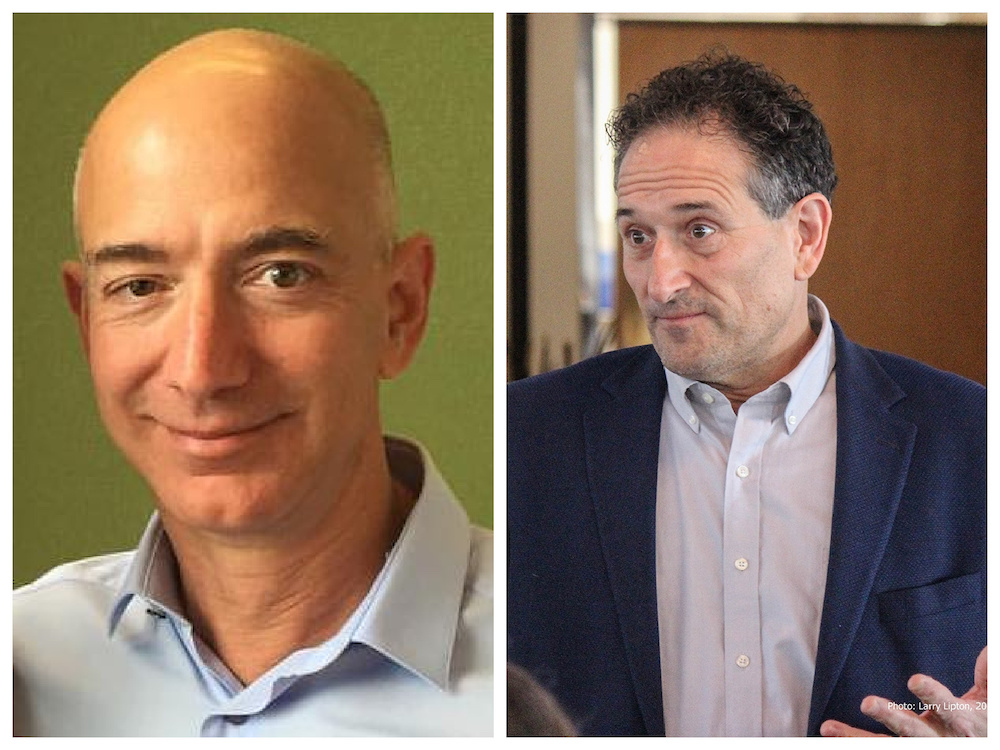 Levin in February spearheaded a warning letter signed by 50 congressional Democrats, including Rashida Tlaib and Debbie Dingell, to Amazon CEO Jeff Bezos, putting him on notice they were closely monitoring the union election of his warehouse workers in Bessemer, Ala.

“You have attempted to coerce your employees out of exercising their voices with misleading text messages and anti-union propaganda and force in-person voting during a pandemic that has resulted in the deaths of nearly 500,000 Americans,” Levin thundered in his letter.

“We ask that you stop these strong-arm tactics immediately and allow your employees freely to exercise their right to organize a union. We will be paying close attention to the way Amazon conducts itself during this vote and call on Amazon to ensure an election for its workers in Alabama that honors the dignity of work.”

The Alabama warehouse workers Thursday voted by more than a 2-to-1 margin against joining the Retail, Wholesale and Department Store union, a referendum Levin declared was “the most important union election of my lifetime.”

By Levin’s own admission, Bezos blew off his warnings. 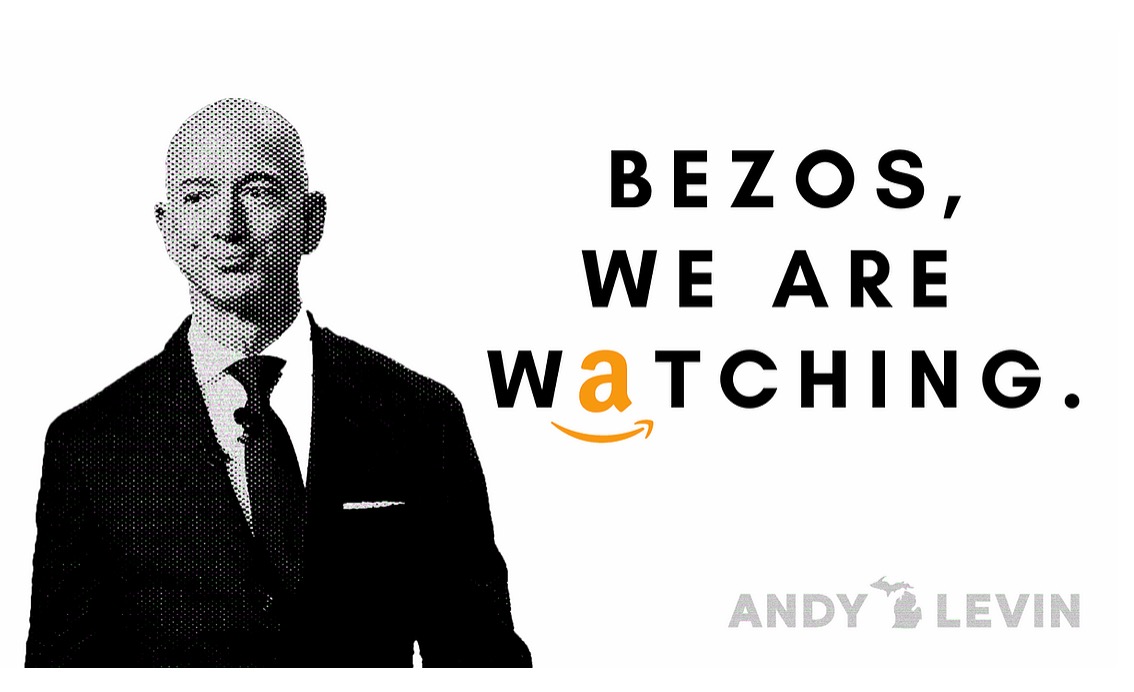 “If (the Amazon warehouse vote) was a foreign election and the Carter Center or Human Rights Watch observed it, they would have held a press conference to say no fair election was remotely possibly under these oppressive and unfair circumstances,” Levin said in a letter to constituents.

Levin, who made a pilgrimage to Bessemer for a photo op with union organizers, on Friday was quoted in The New York Times as saying, “Workers cannot organize to scale in America absent labor law reform, full stop.”

President Biden also expressed support for the Alabama warehouse employees and the rights of all American workers to organize, so indications are that Bezos isn’t too particularly alarmed by the protestations of the supposedly most powerful man on the planet.

In his letter to constituents, Levin, a Harvard law graduate, said the remedies to the NLRB under current law are so weak “as to absolutely incentivize breaking them.”

“If, after many months of litigation, the (NLRB) Board determines that Amazon committed unfair labor practices what will happen? The company will simply have to post some boring notices.”

You know who else especially appreciates how toothless the NLRB is and the meaninglessness of those “boring” notices?

After being cited for violating more than 30 labor laws in its efforts to prevent nurses at its flagship hospital from organizing, Beaumont last year reached an NLRB settlement whereby it agreed to post notices around the hospital saying it would no longer restrict “legally protected rights” to organize.

Despite the Michigan Nurses Association declaring that it would never again seek to “officially” organize Beaumont workers because of the company’s “climate of fear,” the hospital network had the chutzpah to declare the NLRB settlement as a vindication of its union busting efforts.

“This settlement is not a determination or finding by the NLRB that Beaumont violated federal labor law,” Beaumont said in a statement. “The notices Beaumont is (sic) posting as part of the settlement affirm our longstanding commitment to protect nurses’ rights under the law, including their right to support or to oppose unionization. We are deeply appreciative of the heroic work our nurses perform every day.”

The Michigan Nurses Association declared last September that “clearly, something is broken in the way our country’s current labor laws are structured” – the same claim Levin made in The New York Times.

Levin didn’t heed the MNA’s warning, despite Beaumont Royal Oak being in his district. If he had, perhaps he could have championed the Protecting the Right to Organize Act he’s now advocating and had it passed into law in advance of the Amazon warehouse vote.

Levin isn’t a heavyweight when it comes to legislative action. An analysis by the Center for Effective Lawmaking of the last Congress ranks Levin 174th among the 240 Democratic House members in terms of legislative effectiveness. He would clearly benefit from an internship with Gary Peters, Michigan’s junior senator, who was ranked as the most effective lawmaker in the Senate.

Levin notably didn’t lend support for the union drive of nurse anesthetists working at Beaumont’s Royal Oak, Troy and Grosse Pointe hospitals despite intimidation attempts by NorthStar Anesthesia, the outsourcing company that employs them. The national media, and for that matter most of the local Detroit-area media, didn’t cover the story so there were no cameras to preen for.

If Levin was genuinely concerned about the rights of workers to organize, he would be making the rounds of hospitals around the country where legions of managements have hired “labor consultants” to intimidate their nurses and prevent them from organizing. Nurses are increasingly becoming more militant because the pandemic has placed considerably more burdens on them in the wake of layoffs, as supposedly “nonprofit” hospitals seek to increase their profit margins.

Hospital managements typically can’t threaten to close their facilities if nurses unionize, a tactic that Amazon possibly used with its Alabama warehouse workers.

A reader named Laura, who said she owns a couple of bars the Amazon workers frequent, posted this comment in The New York Times:

“The overall feeling re the unionization vote was that Amazon would close the plant (and pull out of construction of a new distribution hub nearby) if the union passed. Obviously people will vote to not unionize if the choice is between keeping their jobs and being jobless but in a union.”

When politicians dictate to companies on how to run their businesses, bad things often happen. In Los Angeles, the city council passed a rule requiring supermarkets to pay their workers an additional $5 an hour for working during the pandemic. What did Kroger do? They closed some poorly performing supermarkets.

If union organizers at Amazon’s Alabama warehouse are looking for counsel from someone who knows how to get the job done, they might consider inviting Sally Gribben, the Certified Registered Nurse Anesthetist who successfully led the Beaumont union drive, for a talk.

Gribben had some time on her hands these past few weeks. NorthStar, at the behest of Beaumont, put Gribben on administrative leave on charges her colleagues said were baseless.

Indeed, they were. Gribben was reinstated on Tuesday. And the NLRB this week certified her union. These accomplishments were achieved without any help or support from Levin or any other Michigan politician.

Gribben and her nurse anesthetist colleagues have demonstrated the problem isn’t with U.S. labor laws. The problem is with the current state of union leaders and politicians like Levin, Tlaib, and Dingell whose only support for union drives are ones that can generate media coverage for themselves.

Reach Eric Starkman at: eric@starkmanapproved.com. Beaumont employees and vendors are encouraged to reach out, with confidentiality assured.

► To support Deadline Detroit's independent journalism, please sign up for a $3 a month membership or a one-time donation.

Columns by this writer: