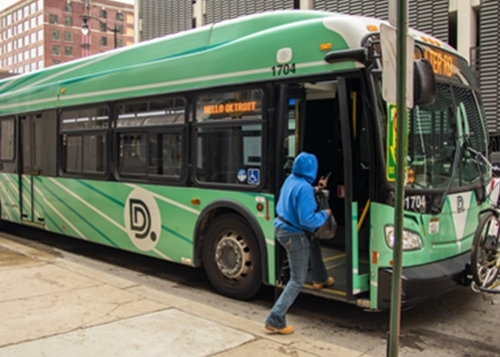 Detroit's bus system is proposing widespread service cuts amid a crippling personnel shortage that has left some routes unmanned and riders waiting hours.

The cuts would reduce frequency along 18 routes, kill portions of some, and suspend three with low ridership, a Detroit Department of Transportation presentation shows. Weekday buses along the main routes will come between 8 and 43 percent less frequently during the busiest hours — 6 a.m. to 6 p.m. Service reductions will in some cases be more pronounced on weekends.

The proposal, detailed here, aims to help the bus system regain reliability after having lost nearly half of its drivers since the start of the pandemic.

In an online presentation mid-day Thursday, DDOT indicated the cuts would be temporary.

"We are planning to start restoring service levels in early 2022 as a first step in a complete reimagining of public transit service in Detroit," a presentation slide read.

DDOT has said it's aggressively recruiting drivers. Jobs pay $14 to $23.18 an hour — an increase from the $12.99 to $18.56 rate drivers were eligible for earlier this year. By contrast, In Chicago, the transit authority this summer announced openings for over 400 part-time drivers at $23.44 to $36.06 an hour. Mayoral spokesman John Roach said DDOT is "strongly considering" offering a hiring incentive.

Riders and others can provide feedback on the proposed changes via email through Sept. 15. They will be detailed again during a Zoom session Thursday at 5:30 p.m.