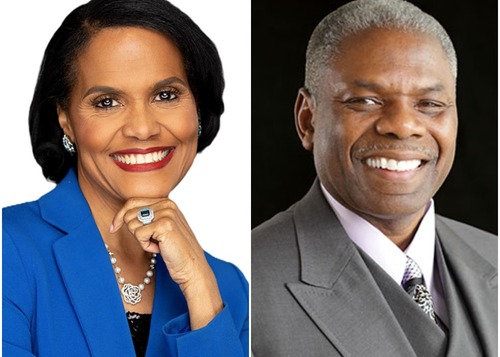 Detroit voters this year have a chance to tip the balance of power on City Council in a high-stakes election held against the backdrop of a federal corruption probe into two members and their top aides.

In District 2, political newcomer Angela Whitfield-Calloway is hoping to unseat Councilmember Roy McCalister, who is seeking a second term.

Additional council candidate guides can be found at the links below. The election is Nov. 2.

1) Tell us a little bit about yourself

My experience with the Detroit Police Department, service in the United States Army, as an investigator with the federal defender’s office of the Eastern District of Michigan, has prepared me to bring oversight and assist the people of my district and the City of Detroit. Being a deacon, at my church, Cedar Christian, has provided me with the blessings and values of direction of our Lord and Savior in decision-making. As a lifetime resident of Detroit, son, husband, father, and grandfather, I understand the challenges of families and neighborhoods.

2) What are Detroit's primary challenges?

The crime rate remains far too high. Families, businesses, cultural institutions, or entertainment attractions are made nervous by the high rates of crime in our city, which makes it harder to bring these types of things back to Detroit. If we want to grow our population once again, after so many decades of residents leaving the city, we need to make sure public safety is a top priority.

3) What steps will you take to address those?

Our police department does a good job, despite the many challenges associated with policing in Detroit, but they need more support from citizens and elected officials to help bring down our city’s crime rate. Of course, the crime rate doesn’t just come down to whether or not there are enough cops on the beat. As some activists have pointed out, crime is rooted in a variety of social and economic problems that have long plagued cities like Detroit. These are things like poverty, education, mental health and cultural issues and we need to address those things in order to help alleviate crime in Detroit.

However, the fact that these issues exist does not, in my opinion, mean we can neglect or defund our Police Department. The everyday need for public safety requires that we have to have police, and arguably more police, and arm them with the best technological tools in order to keep our citizens safe. Once we are able to take a more holistic approach to crime and the underlying roots of crime, by funding both our police as well as things like mental health services, putting more money into our children’s classrooms, emphasizing personal responsibility and family cohesion, and employment opportunities, I am confident we will begin to see the rate crime in our city steadily fall.

4) Why should voters elect you over your opponent?

I believe the record of accomplishments my office has accrued for District 2 over the last four years is one that residents know has produced positive results. In 2017, I ran on a number of objectives and believe I have accomplished them all.

Those include finally bringing new development and job opportunities to the former State Fairgrounds, passing Proposal N to end blight in our neighborhoods once and for all, supporting our Police Department to improve public safety, and tirelessly advocating for more mental health services for Detroit residents.

I also take pride in conducting rigorous oversight of the activities of the city administration. This includes being extremely detailed and careful when reviewing any contracts coming before Council for approval.

I also believe strongly in always being accessible to my constituents and all Detroiters and have a track record of doing so. I do this because engaging with as many perspectives as possible while also considering all the information available leads to the best possible decisions. This is why when an important zoning change was before Council that would affect communities in District 6, I went on a tour of those neighborhoods with Councilwoman Castaneda-Lopez even though the zoning issue was not going to affect my district.

Finally, I am hopeful my constituents know the pride and passion I have for serving them as their councilman. People in neighborhoods across D2 know that I have been consistently present at their block club meetings and in regular contact with them, long before I was on Council. Public service is not just my career choice, it is my passion. This is why I served as a police officer with DPD, why I served in our military stationed in Korea, Germany, and Iraq. And when Covid hit, why I volunteered every day at the State Fairgrounds testing site.

5) Are there any council decisions with which you've disagreed since 2014? What are those?

Although there are issues and decisions, made prior to my tenure in office, that I have disagreed with, especially various decisions made by the emergency manager and the lack of transparency typical of that period of our city's history, my office has sought to make progress on those issues not look back and criticize on issues that I didn't vote on prior to my time on council. These include the over taxation/assessments, and mental health concerns, just to name a few.

6) Are there any mayoral agenda items with which you've disagreed since 2014? What are those?

I would have preferred that there were more, and better, controls and oversight put in place over the Detroit Land Bank Authority. There remain serious concerns in neighborhoods about how the DLBA is run and whether, at least in the past, it is transparent enough. I would have also preferred demolitions be moved to a standalone department sooner than they were. Today, I believe the DLBA is competent and well intentioned, but early on it was a serious source of concern.

Additionally, in 2019, when Council initially voted down placing Proposal N on the ballot, I voted no because I had concerns about Council’s ability to properly provide oversight and uphold accountability of city demolition, while also providing job and homeownership opportunities to Detroiters. I believe that vote ensured that the City Administration worked with myself and my colleagues to strengthen the proposal that voters approved in November 2020. Proposal N included the things the previous ballot measure lacked. It created a greater degree of oversight and accountability, it prioritized jobs for Detroiters and ensured that the homes that need to go will be demolished and that some 8,000 homes that are salvageable will be secured for homeownership for Detroiters.

1) Tell us a little about yourself

I’m Angela Whitfield Calloway, a lifelong Detroiter married 32 years and the mother of four young adults who are all Detroit residents. I graduated from Cooley High School, received my BA from Spelman College in Atlanta, earned my law degree from the Detroit College of Law and graduated from The Campaign school at Yale Law, summer class of 2021.

2) What are Detroit's primary challenges?

3) What steps will you take to address those?

I will engage and reach out to the community, non-profits, community groups, faith-based organizations and churches. I will work with my colleagues and the administration to address all of these issues one by one in a more substantive, meaningful manner. The conversations must be had and, after the conversations, action will be taken.

4) Why should people elect you over your opponent?

I am not a rubber stamp. My voice and vote will never be for sale. I am independent — unbought and unbossed. I am a fighter. I will fight with every ounce of my energy for a better quality of life for ALL Detroiters.

5) Are there any council decisions with which you've disagreed since 2014?

There are several decisions that I don’t agree with but I’ll list just a couple here. I disagree with the council’s decision not to address the $600 million overtaxation of Detroit homeowners; its decision to proliferate our communities with bike lanes and bus stops almost built in the middle of streets; and its decision to hire the Clark Hill law firm to counter sue innocent Detroit Will Breathe protesters. The contract cost we the taxpayers over $200,000. The lawsuit was dismissed by The Honorable Laura Michaelson. Lastly, I oppose the council approving the contract for facial recognition technology purchased from a South Carolina based company.

6) Are there any mayoral agenda items with which you've disagreed since 2014?

Ignoring the $600 million overtaxation of Detroit homeowners, devoting resources and millions in funding to developers in downtown and Midtown as our neighborhoods continue to be overlooked and neglected, locking the majority of Detroiters out of contracts, jobs, opportunities and access. There’s no reason for anyone to ask why African Americans are moving out of Detroit.