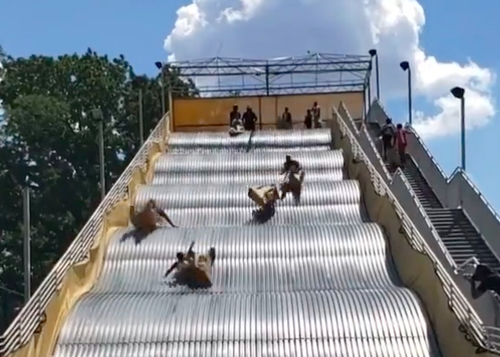 Things went off without a hitch for a WDIV reporter dispatched to test the slide early Friday (on his birthday no less). The station reports the Department of Natural Resources has made adjustments including scrubbing its surface and spraying light water between rides to help control speed.

WXYZ, meanwhile, reports the slide's stewards are "telling people to lean forward and not do the rockaway and lean back" to avoid bouncing.

Those changes and warnings, however, didn't spare some. One woman went down with a thud Friday afternoon, prompting reaction from a small crowd gathered to watch.

The slide is scheduled to operate from 11 a.m. to 3 p.m. Friday through Sunday. It will reopen next weekend before shutting for the off season. Rides are $1.